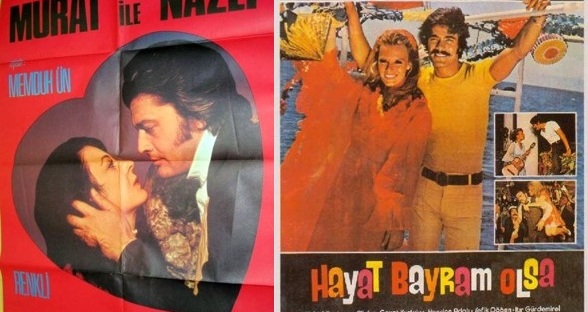 Shakespeare Romeo and Juliet (1595) is one of the most touching tragedies about the fatal web of relations and circumstances that led to the “woe” of the two “star-crossed” lovers.

Following Zefirelli’s 1968 adaptation, the play and its adaptation once again attracted Turkish directors.

Domesticising the play’s setting to the Turkish countryside, Memduh Ün’s Murat ile Nazlı (1972) depicts how a bloodfeud seperates two lovers for many years only to re-unite them in their old age. While the use of Leroy Holmes instrumental version of Nino Rota’s music in Zeferelli’s movie naturally creates a proximity of both Shakespeare’s play and Zeferelli’s adaptation with Ün’s serious movie, the choice of having a happy ending for Murat ile Nazlı could be considered a Turkish reply that happiness is possible.

Orhan Aksoy’s Hayat Bayram Olsa (1973) is similarly domesticising Shakespeare’s play, but now into a small town in the seaside where again feuding families try to prevent a happy ending for the lovers. Compared to Ün’s vision, Aksoy’s movie is more in the comic mode and presents the fake deaths of the lovers really as fake ones to send with the families the didactic message that lovers should not be prevented from loving each other. Once again leaving out the deaths of the lovers, the movie, as an allusion to its title, sends the message that every day should be like a holiday in revelry and happiness.

Enjoy the movies for yourself!

Assoc. Prof. Dr. Murat Öğütcü received his PhD degree with his dissertation entitled “Shakespeare’s Satirical Representation of the Elizabethan Court and the Nobility in His English History Plays” from the Department of English Language and Literature at Hacettepe University, Turkey, in 2016. From August 2012 to January 2013, he was a visiting scholar at the Graduate Center of the City University of New York. He was the Head of the Department of Western Languages and Literatures at Munzur University, Turkey, between 2016 and 2021. He is currently an independent scholar who works part-time at Cappadocia University, Turkey. He is a researcher at the AHRC-funded project “Medieval and Early Modern Orients” that aims to contribute to our understanding of the medieval and early modern encounters between England and the Islamic Worlds. He has written book chapters and articles on his research interests that include early modern studies, Shakespeare, and cultural studies. His recent essays include “Masculine Dreams: Henry V and the Jacobean Politics of Court Performance,” Of Fathers and Sons: Inter-Generational and Intrafamilial Loyalties and Conflict in Shakespeare’s Elizabethan History Plays,” “Von Freunden und Fraktionen: Die Historiendramen von Shakespeare [Of Friends and Factions: Shakespeare’s History Plays],” “Julius Caesar: Tyrannicide Made Unpopular,” “Public Execution and Justice On/Off the Elizabethan Stage,” “Shakespeare in Animation,” “Early Modern English Historiography: Providentialism versus New History,” “Comedy and Fun: Is Shakespeare Funny?,” “A Tale of Two Nations: Chaucer, Henryson, Shakespeare, Troilus and Criseyde,” “The ‘Gothic’ in Hamlet,” and “Teaching Shakespeare Digitally: The Turkish Experience.” View all posts by muratogutcu